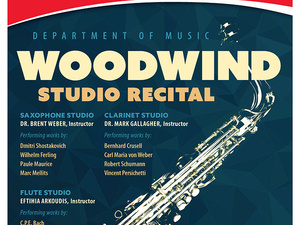 FSU’s Department of Music to Present the Woodwind Studio Recital

The Frostburg State University Department of Music will present student musicians and faculty artists in the Woodwind Studio Recital on Sunday, May 12, at 3 p.m. in the Pealer Recital Hall of FSU’s Woodward D. Pealer Performing Arts Center. The recital will feature solos and duets for saxophone, flute and clarinet. This event is free and open to the public.

“Prelude No. 7” by Dmitri Shostakovich, arranged by Sharon Davis, will be performed by Donald Linn on baritone saxophone and Dr. Brent Weber on piano. The piece is from the set of 24 preludes and fugues for solo piano, one in each of the major and minor keys of the chromatic scale. The cycle was composed in 1950 and 1951.

The two movements “Adagio con espressione” and “Moderato risoluto” are from “48 Etudes pour les Saxophones” by Wilhelm Ferling, to be performed by Joshua Foreman on alto saxophone. Ferling was a German oboist, composer and clarinetist. An accomplished musician, he is chiefly remembered for his 48 etudes published in 1840.

“Cansoun per ma mio” (“Song for My Love”), “La bohemienne” (The Bohemian Woman”) and “Des alyscamps l’ame soupier” (“A Sigh on the Soul for the Alyscamps”) are from “Tableaux de Provence” (“Pictures of Provence”) by Paule Maurice and will be performed by Caitlyn Rund on alto saxophone and Dr. Joseph Yungen on piano. Composed between 1948 and 1955, the movements describe the culture and scenery of Provence in southeast France.

“Black,” to be performed by Eric Foreman and Weber on baritone saxophone, was written by American composer and musician Marc Mellits in 2010. Mellits’ music is influenced by minimalist and rock music.

Carl Philipp Emanuel Bach’s “Sonata in A Minor for Solo Flute” quasi-constitutes a counterpart to the suite of his father, Johann Sebastian Bach, in the same key. Created in 1747, it heralds the sentimental style of a new era. The movement from this piece will be performed by Kyla Nauman on flute.

“Carmen Fantasie Brillante,” composed by Francois Borne in 1900, is based on themes from the opera “Carmen” by Georges Bizet, composed in 1875. Borne runs through many of the great themes from this popular opera. Alexandra Hill, on flute, and Yungen, on piano, will present this piece.

“Anitra’s Dance” from “Peer Gynt Suite No.1 for Flute and Piano” by Edvard Grieg will be presented by Paige Green on flute and Yungen on piano. The story concerns a young Norwegian ruffian, Gynt, who dreams of becoming emperor of the world. His sundry adventures are the stuff of high drama and adventure.

“Three Fantasy Pieces” (“Drei Fantasiestücke”), written in 1849 by Robert Schumann, will be performed by Kaitlyn Tilley. This poetic title promotes the fundamental Romantic notion that creative expression is the product of the artist’s unrestricted imagination.

Vincent Persichetti composed for nearly every instrumental medium. “Serenade No. 13,” to be performed by Carmen Grimes, was commissioned by the Chapin School of New York City in 1964. This piece contains seven short duets that explore just one or two themes.

Liz Munger will perform “Grand Duo,” a three-movement work for clarinet and piano composed by Carl Maria von Weber from 1815 to 1816. Weber most likely composed the work for himself on piano and his friend Heinrich Baermann, a leading clarinetist of the era.

Bernhard Henrik Crusell was a Finnish composer and clarinetist, known for his mastery in pianissimo while keeping evenness and a round tone throughout the clarinet’s range. As seen in “Duo No. 2 in D Minor,” his playing style influenced his compositions by demanding the full range of instruments to be used with softer dynamics. This piece will be performed by Josh Bittinger.