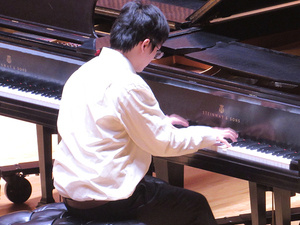 Frostburg State University’s Department of Music will present the Piano Studio, under the direction of Dr. Jay DeWire, in a recital on Sunday, Nov. 7, at 3 p.m. in the Pealer Recital Hall of FSU’s Woodward D. Pealer Performing Arts Center. This event is free and open to the public. If you can't attend the recital, it will also be livestreamed; click the 'Join Stream' button on this page a few minutes before the recital is scheduled to begin, or anytime during the recital, to view the live performance..

Haydn composed the “Piano Sonata in E Minor, Hob. XVI/34, L. 53” in the late 1770s. The first movement displays Haydn’s talent at its most subtle in this lyrical yet dramatic piece. It is described as an unsmiling, precise movement, which is unique in Haydn’s sonatas. The movement is a collection of musical fragments that never seem to gather momentum and, every time they try to, Haydn inserts a full stop and the music suddenly grinds to a halt.

Mozart’s “Piano Sonata No. 12 in F Major, K. 332” was published in 1784. The first movement is in a classical sonata form, with repeats for the exposition, development and recapitulation. There are two basic characteristics of this movement: the song-like themes and the combination of styles. Mozart uses diverse styles, including galant homophony, learned counterpoint and even the intense Sturm und Drang style.

“Sonata No. 17 in B-flat Major, K 570,” dated February 1789, is Mozart’s penultimate sonata, and it did not become known until five years after his death when it was published for piano and violin. The “Adagio” is a rondo with two episodes that sets out to beguile rather than convey profundity.

Schubert composed his lied “An die Musik” (“To Music”) in 1817 for solo voice and piano, with text from a poem by his friend Franz von Schober. A hymn to the art of music, it is one of the composer’s best-known songs. Its greatness and popularity are generally attributed to its harmonic simplicity, sweeping melody and a strong bass line that effectively underpins the vocal line.

The “Nocturnes, Op. 48” are a set of two nocturnes for solo piano Chopin composed in 1841. When compared with the more melancholy outer themes of “Nocturne in F-sharp Minor, Op. 48, No. 2,” the middle section is completely different. Chopin once noted that this section was like a recitative and should be played as if “a tyrant commands, and the other asks for mercy.”

Ravel’s “Ma mère l’Oye” was originally written as a five-movement piano duet in 1910, subtitled “cinq pièces enfantines” (“five children's pieces”). In 1911, Ravel orchestrated the work. Later the same year, he also expanded it into a ballet.