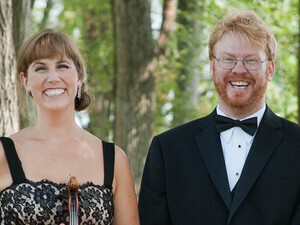 Frostburg State University’s Department of Music will present pianist Dr. Jay DeWire and violinist Heather Haughn in a Faculty-Guest Artist Series concert, “Russian Masters, Part 2,” on Sunday, Oct. 10, at 3 p.m. in the Pealer Recital Hall of FSU’s Woodward D. Pealer Performing Arts Center. The concert is free and open to the public. This event will also be livestreamed; follow the link at www.frostburg.edu/concerts.

The program will include “Souvenir d’un lieu cher” by Pyotr Ilyich Tchaikovsky, “Divertimento” by Igor Stravinsky and “Violin Sonata No. 2 in D Major, Op. 94a” by Sergei Prokofiev.

In 1878, while in Switzerland, Tchaikovsky wrote the first part of his Op. 42 cycle for violin and piano, “Souvenir d’un lieu cher (Memory of a dear place).” It consists of three movements, “Méditation,” “Scherzo” and “Mélodie,” and the “dear place” referred to Bavilivo, the Ukrainian country estate of his patroness, Nadazhda von Meck.

Stravinsky’s ballet “The Fairy’s Kiss,” based on “The Snow Maiden” by Hans Christian Andersen, was written in 1928. In 1932, Stravinsky and his violinist friend Samuel Dushkin made a transcription of nearly half the score for violin and piano. That chamber score then became the basis for the orchestral “Divertimento,” which came in 1934. Curiously not as widely known as many other Stravinsky scores, “The Fairy’s Kiss” includes familiar and not-so-familiar Tchaikovsky songs and piano pieces transformed with considerable affection, wit and imagination.

Prokofiev’s “Violin Sonata No. 2 in D Major, Op. 94a” was based on the composer’s own “Flute Sonata in D, Op. 94,” written in 1942 but arranged for violin in 1943 when Prokofiev was living in Perm in the Ural Mountains, a remote shelter for Soviet artists. Prokofiev transformed the work into a violin sonata at the prompting of his close friend, the violinist David Oistrakh. The work is highly classical in design as it opens with a sonata movement, which is followed by a scherzo, a slow movement and a great finale. The violin part is replete with virtuosic display but is also highly lyrical and elegant, evidence of the piece’s inception as a sonata for flute.