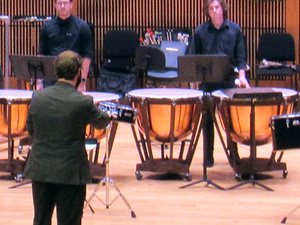 Frostburg State University’s Percussion Ensemble will present its fall concert on Wednesday, Oct. 27, at 7:30 p.m. in the Pealer Recital Hall of FSU’s Woodward D. Pealer Performing Arts Center. This event is free and open to the public. If you can't attend the recital, it will also be livestreamed; click the 'Join Stream' button on this page a few minutes before the recital is scheduled to begin, or anytime during the recital, to view the live performance..

The concert will feature “Caprice Diabolique” by Jared Spears, “One o’Clock Samba” by Lynn Glassock, “Parade” by Morton Gould, “Concerto for Drum Set and Percussion Ensemble” by John Beck, an arrangement of the second movement from “Symphony No. 9” by Antonín Dvořák and an arrangement of “Sabre Dance” by Aram Khachaturian.

Spears is a professor emeritus at Arkansas State University. He has taught theory, history, composition, percussion and band at all educational levels. Since his retirement, he has maintained a heavy schedule of composing and conducting. “Caprice Diabolique,” whose title translates as “diabolic whim,” exhibits modal melodies and ominous timbres beneath a thin layer of playfulness.

Glassock has received several awards for his compositions. His professional experience includes performances with the Dallas Symphony Orchestra, Fort Worth Symphony and Fresno Philharmonic. Glassock is an associate professor of music at the University of North Carolina at Chapel Hill. “One o’Clock Samba,” for percussion ensemble, was published in 1993.

Gould was an American composer, conductor, arranger and pianist who was able to seamlessly combine multiple musical genres and wildly disparate elements into formal classical structure while maintaining their distinctive elements. In 1995, Gould was awarded the Pulitzer Prize for Music for “Stringmusic” and in 2005, was honored with the Grammy Lifetime Achievement Award. “Parade,” published in 1956, is an exciting march for three drummers.

Beck was a member of the Eastman School of Music faculty from 1959 to 2008 and continues as professor emeritus of percussion. His career as a performer and teacher includes posts as percussionist, timpanist and marimba soloist with the United States Marine Band; principal percussionist with the Rochester Philharmonic; and timpanist for the Rochester Philharmonic. “Concerto for Drum Set and Percussion Ensemble” was written in 1979.

Dvořák composed “Symphony No. 9,” popularly known as the “New World Symphony,” in 1893 while he was the director of the National Conservatory of Music of America. It has been said that America’s “wide open spaces” inspired him to write the second movement of this piece. This version takes Clair Omar Musser’s arrangement for marimba orchestra, adapts it for a percussion ensemble of eight and retains the original timpani part.

“Sabre Dance” is a movement in the final act of Khachaturian’s ballet “Gayane” (1942), where the dancers display their skill with sabres. It is the composer’s best-known and most recognizable work. This bombastic version contains the instructions to “use as many players as possible” and serves as a fantastic closing piece.