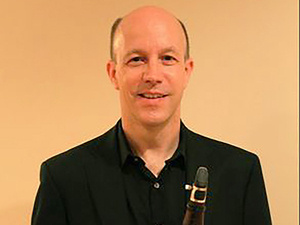 Frostburg State University’s Department of Music will present clarinetist Dr. Mark Gallagher in a Faculty Artist Series concert on Tuesday, Nov. 30, at 7:30 p.m. in the Pealer Recital Hall of FSU’s Woodward D. Pealer Performing Arts Center. He will be accompanied by pianist Dr. Joseph Yungen, saxophonist Dr. Brent Weber and percussionist Dr. Mackenzie Jacob LaMont. The concert is free and open to the public. This event will also be livestreamed; the link will be posted at www.frostburg.edu/concerts.

Crusell’s compositions are noted for their beautiful melodies, rich harmonies and expert craftsmanship. Although quite classical in nature, his writing also ventured into the realm of early Romanticism. His clarinet concertos are particularly noteworthy. His solo lines combine the clarity and symmetry of the classical clarinet works, with sumptuous vocal lines and adventurous technical passages more prevalent in Romantic music.

The series of “Songs Without Words” (“Lieder ohne Wrote”) that Mendelssohn wrote and published from 1830 onward serve as a very personal musical diary in which the composer expressed very precise musical ideas that had, he alleged, no verbal equivalent. The works were part of the Romantic tradition of writing short lyrical pieces for the piano, although the specific concept of “Songs Without Words” was new.

Berg belongs to the Second Viennese School, which defined musical advancement through atonality and the 12-tone technique. His modest oeuvre is explained not only by his early death, but also by his high aesthetic standard. His two operas “Wozzeck” and “Lulu” shaped 20th-century music theatre. He also wrote essays on analytical and aesthetic matters. The concise miniatures, “Four Pieces for Clarinet and Piano,” are outstanding examples of the “little pieces” genre.

Burge composed “Sources III for Clarinet and Percussion” in 1967. The piece utilizes theatrical elements (motion and light) in what is basically a concert work. The composer of more than 100 works, Burge is also the author of several hundred articles on a variety of musical subjects. As a performer, he was noted for championing contemporary pieces.

An active chamber musician and co-founder of I Venti Semplice, Gallagher has performed throughout the United States, Europe and China. In addition to a busy performance schedule, Gallagher is an active teacher and clinician, lecturing on occupational health issues for musicians and the Alexander Technique. He is an instructor of clarinet and music theory at FSU and has held pedagogical posts at the University of Wisconsin-Milwaukee, Carroll College. During the summer, Gallagher has been the director of faculty at the Semplice Harbor School of Music and Chamber Music Festival on Washington Island, Wis., and director of the Savage Mountain Summer Arts Academy at FSU.