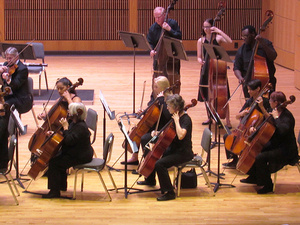 Frostburg State University’s Department of Music will present the String Ensemble conducted by Joseph Gaskins in concert on Wednesday, Nov. 10, at 7:30 p.m. in the Pealer Recital Hall of FSU’s Woodward D. Pealer Performing Arts Center. This event is free and open to the public. If you can't attend the recital, it will also be livestreamed; click the 'Join Stream' button on this page a few minutes before the recital is scheduled to begin, or anytime during the recital, to view the live performance..

Nielsen's “Little Suite for Strings” was completed and published in 1888 as his Op.1, although he had already published a number of other works by this time. The suite begins in a serious vein with a dark and moody “Praeludium.”

Mozart’s popular “Eine kleine Nachtmusik (Serenade No. 13 for Strings in G Major), K. 525” is a 1787 composition for a chamber ensemble. The German title means “a little serenade,” though it is often rendered more literally as “a little night music.” The work was written for an ensemble of two violins, viola, cello and double bass, but is often performed by string orchestras.

“St. Paul’s Suite in C Major (Op. 29, No. 2),” originally titled simply “Suite in C,” is a popular work for string orchestra by English composer Holst. Finished in 1913, but not published until 1922 due to revisions, it takes its name from St Paul’s Girls’ School in London. Holst served as the school’s music master and was grateful to the school for building a soundproof studio for him. The suite is one of many pieces he wrote for the school’s students.

Corelli's “Trio Sonatas” were dedicated in 1689 to Duke Francesco II of Modena. Op. 3 is called “Sonata da Chiesa” or “Church Sonata” and was played in sacred places. It is in four movements: slow-fast-slow-fast, and it has a marked contrapuntal style.

Britten composed the “Simple Symphony, Op. 4” between 1933 and 1934, using bits of score he had written for the piano as a young teenager. The piece is dedicated to Audrey Alston, Britten’s viola teacher during his childhood. The piece is based on eight themes for which he had a particular fondness. Britten completed his final draft of this piece at age 20.

The “Trout Quintet (Forellenquintett)” is the popular name for the “Piano Quintet in A Major, D. 667” that Schubert composed in 1819, when he was 22 years old. it was not published, however, until 1829, a year after his death. Compared to his other major chamber works, the “Trout Quintet” is a leisurely work, characterized by lower structural coherence. The importance of the piece stems from its use of an original and innovative harmonic language and timbral characteristics.