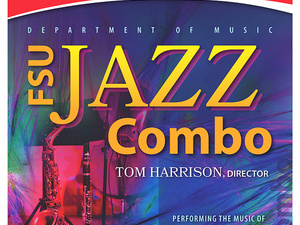 FSU’s Department of Music will present a Jazz Combo Recital on Tuesday, May 7, at 7:30 p.m. in the Pealer Recital Hall of FSU’s Woodward D. Pealer Performing Arts Center. The concert, directed by Tom Harrison, is free and open to the public.

“Jinrikisha” was part of “Page One,” Henderson’s debut album released in 1963. Henderson was an American jazz tenor saxophonist whose career spanned more than four decades, during which he recorded for several prominent labels, including Blue Note.

“Solar” is attributed to Davis from the studio album “Walkin’,” released in 1954. It is considered a modern jazz standard. Davis was an American jazz trumpeter, bandleader and composer who is often considered one of the most influential and acclaimed figures in the history of jazz and 20th-century music.

Gillespie’s “Con Alma” is a jazz standard appearing in his 1954 album “Afro.” The piece includes aspects of bebop jazz and Latin rhythm and is known for its frequent changes in key centers while maintaining a singable melody. Gillespie was an American jazz trumpeter, bandleader, composer and singer. He is known for his work in building on virtuoso style by adding layers of harmonic and rhythmic complexity previously unheard in jazz.

Rollins’ “Pent Up House” is part of his jazz album “Sonny Rollins Plus 4,” released in 1956. It is a medium-fast swinger and is considered hard-bop, a jazz subgenre associated with influence from rhythm in blues and gospel music. Rollins is an American jazz tenor saxophonist who, in his seven-decade career, has recorded more than 60 albums. Several of his pieces, including “Pent Up House,” have become jazz standards.

Silver was an American jazz pianist, composer and arranger. He is known for his work in the hard bop style, which he helped pioneer in the 1950s. His songs “Nica’s Dream” and “Strollin’,” are part of his album “Horace-Scope,” which was released in 1960. “Nutville” was released as part of his album “The Cape Verdean Blues” in 1966.

Harrell is an American jazz trumpeter, flugelhornist, composer and arranger who was voted Trumpeter of the Year in 2018 by Jazz Journalists Association. Harrell is considered one of the most creative and dynamic jazz instrumentalists and composers of our time, having 280 recordings throughout his five-decade career. Harrell’s “Moon Alley” was released through Criss Cross Jazz in 1985.