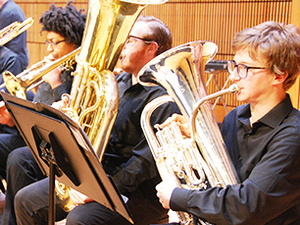 The Frostburg State University Department of Music will present a concert by the Brass Ensemble, conducted by Joshua Bishop, on Wednesday, Dec. 1, at 7:30 p.m. in the Pealer Recital Hall of FSU’s Woodward D. Pealer Performing Arts Center. The concert is free and open to the public. This event will also be livestreamed; the link will be posted at www.frostburg.edu/concerts.

The concert begins with “Fanfare for the Uncommon Woman” by Bob Atwell, a very short brass quintet dedicated to Gabrielle Giffords, an American retired politician and gun control advocate.

Next is “Morgenmusik” (“Morning Music”) composed in 1932 by Paul Hindemith. The piece consists of three very short movements – “Massig Bewegt,” “Lied” and “Bewegt.” Hindemith’s idea was to use “Morgenmusik” as a tribute to the medieval tradition of greeting the sun.

The world premiere of Dr. Scott Rieker’s “O Sacrum” follows. Rieker is a lecturer in FSU’s Department of Music whose teaching interests include choir, voice and choral music education.

“Semper Fidelis” (“Always Faithful”) by John Philip Sousa (The March King) concludes the first part of the program. Written in 1888, it is regarded as the official march of the U.S. Marine Corps. There is a very prominent drum solo in the middle of the piece, which includes a skillful dynamic change. It features staccato notes and sharp tonguing.

After intermission, the ensemble will perform “Loch Lomond” or “The Bonnie Banks o’ Loch Lomond,” a Scottish folk song arranged by Mike Forbes. The piece is a Jacobite adaptation of an 18th-century song, with the lover explaining why he and his true love will never meet again; he is dying for his king and taking only the “low road” of death back to Scotland.

“The Lord’s Prayer” by Albert Hay Malotte, arranged by Demondrae Thurman, will feature the FSU Euphonium Quartet. Malotte composed this musical setting of the biblical Lord’s Prayer in 1935 and dedicated it to baritone John Charles Thomas, whose radio performances introduced it to the public.

Next, the FSU Trumpet Quartet will perform “Adagio for Four Trumpets” that Victor Berga composed in 2007, after which the program will feature the FSU Low Brass Quartet in an “Epic Disney Love Song Medley” arranged by Nathan Davis.

“Christmas Song Suite,” arranged by Eugene Vasconi and Pentatonix, includes holiday favorites “Silent Night” and “We Wish You a Merry Christmas,” as well as “Carol of the Bells,” a popular Christmas carol composed by Mykola Leontovych in 1914. The song is based on the Ukrainian folk chant “Shchedryk.”