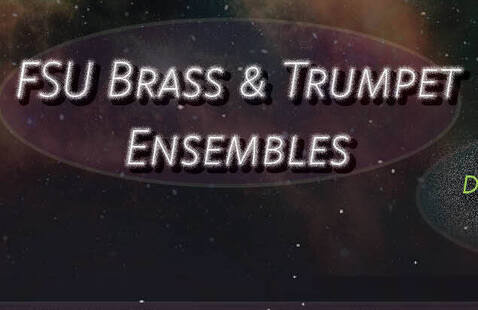 Pealer Recital Hall, PAC
Add to calendar
Save to Google Calendar Save to iCal Save to Outlook

Brass and Trumpet Ensembles to Present Concert at FSU

Frostburg State University’s Department of Music will present its Brass Ensemble and Trumpet Ensemble in concert on Monday, Dec. 5, at 7:30 p.m. in the Pealer Recital Hall of FSU’s Woodward D. Pealer Performing Arts Center. The concert is free and open to the public. This event will also be livestreamed; click the “Join Stream” button on this page a few minutes before the recital is scheduled to begin, or anytime during the recital, to view the live performance.

The program will include “Vienna Philharmonic Fanfare” by Richard Strauss, “Novorossiysk Chimes” by Dmitri Shostakovich, “Venus” and “Saturn” from “The Planets” by Gustav Holst, “Trumpet Salutations” by Nigel Coombes, “Finale” from “Symphony No. 5” by Pyotr Tchaikovsky and the traditional Christmas carols “Deck the Halls,” “The First Noel” and “Adeste Fideles.”

Strauss composed his “Vienna Philharmonic Fanfare” (“Wiener Philharmoniker Fanfare”) in 1924 for the Vienna Philharmonic Orchestra. The fanfare opened the orchestra’s inaugural benefit ball to raise money for the musicians’ pension fund. It is still performed each year.

“Novorossiysk Chimes” (also known as “The Flame of Eternal Glory” or “The Fire of Eternal Glory”) was written by Shostakovich in 1960 for the war memorial in the city of Novorossiysk. The piece consists, mainly, of material Shostakovich had originally written in 1943 as an entry in a contest to compose a new national anthem for the U.S.S.R. “Novorossiysk Chimes” has been playing nonstop at Heroes Square in Novorossiysk since its opening in 1960. The song’s opening phrases have also been used as introductory music for Moscow Radio’s late-night news program “CKACWH.”

“The Planets” is a seven-movement orchestral suite by the English composer Holst, written between 1914 and 1917. Each movement of the suite is named after a planet of the solar system and its supposed astrological character. The innovative nature of Holst’s music caused some initial hostility among a minority of critics, but the suite quickly became and has remained popular, influential and widely performed.

“Trumpet Salutations for Six B-flat Trumpets to the Irish Guards Fanfare Trumpeters” is approximately 90 seconds in length. It was given by the composer to the International Trumpet Guild and published in 2002 by the guild. Coombes is the staff arranger of the HM Band of the Irish Guards London.

“Symphony No. 5” by Tchaikovsky was composed in 1888. The piece is a cyclical symphony, and the recurring main theme is used as a device to unify the symphony’s four movements. This motto theme, sometimes dubbed “fate theme,” has a funereal character in the first movement, but gradually transforms into a triumphant march, which dominates the final movement.

“Deck the Halls” (originally titled “Deck the Hall”) is a traditional Christmas carol. The melody is Welsh, dating back to the 16th century and belongs to a winter carol, “Nos Galan,” while the English lyrics, written by the Scottish musician Thomas Oliphant, date to 1862. “The First Nowell,” also known as “The First Noel” (or “Noël”), is a traditional English Christmas carol with Cornish origins, most likely from the early modern period, although possibly earlier. “O Come, All Ye Faithful” (originally written in Latin as “Adeste Fideles”) is a Christmas carol that has been attributed to various authors and anonymous Cistercian monks.