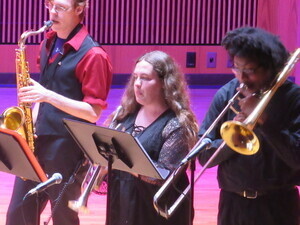 FSU’s Department of Music Presents “An Evening of Jazz”

Frostburg State University’s Department of Music will present “An Evening of Jazz” with FSU’s Jazz Orchestra and Jazz Combo on Saturday, Nov. 20, at 7:30 p.m. in the Pealer Recital Hall of FSU’s Woodward D. Pealer Performing Arts Center. The concert is free and open to the public.If you can't attend the recital, it will also be livestreamed; click the 'Join Stream' button on this page a few minutes before the recital is scheduled to begin, or anytime during the recital, to view the live performance..

For the Jazz Orchestra’s portion of the program, the theme will be “The Kid From Red Bank, a Tribute to Count Basie.” The orchestra will be conducted by Dr. Brent Weber, and the performance will feature compositions as performed by the Count Basie Orchestra, as well as some modern tunes for jazz ensemble. Composers include Frank Foster, Neal Hefti, Lester Young, Gordon Goodwin, Eric Richards and Chick Corea.

The Jazz Combo, under the direction of Tom Harrison, is comprised of Riley House on alto saxophone and piano; Max Partlow on soprano, alto and tenor saxes; Alex Frye on trumpet; Emily Brobst on piano, flute and vocals; Shawn Zimmerman on guitar; and Jordan Nolan on drums, with Harrison on bass.

The Jazz Combo’s portion of the concert starts with “Sea Journey” written by Corea, who passed earlier this year and accumulated 25 Grammys during his lucrative lifetime as one of the world’s greatest jazz pianists and composers.

“Road Song,” written by jazz guitarist Wes Montgomery and released in 1968 on the album of the same title, reached number one on the jazz charts and fared well on the R&B charts. Montgomery is known for his signature method of playing in octaves in his guitar melodies.

Pittsburgh tenor saxophonist Stanley Turrentine was a prominent contributor to the soul-jazz movement going on around 1970, and his composition “Sugar” is one of his best-known songs.

Meredith Willson wrote “Till I Met You” in 1950, and then retitled the song as “Till There Was You” for the 1957 musical, “The Music Man.” It subsequently appeared in the musical’s 1962 film version. It was recorded by many artists, including The Beatles, heard on their second album in 1963. This song will feature Brobst on vocals and flute while House moves from sax to piano.

In 1969, pianist Herbie Hancock was transitioning from playing straight-ahead jazz into more of a fusion of jazz, rock and funk. His composition from that time, “Tell Me a Bedtime Story,” has elements of fusion, while still maintaining complex harmonies throughout, along with a section in an odd-time signature.

The straight-ahead jazz swing tune “Solar” is accredited to trumpeter Miles Davis on his 1954 album “Walkin’,” although it was adapted from a Chuck Wayne song.

Grammy Award-winning, contemporary jazz trumpeter Roy Hargrove included the song “Strasbourg-St. Denis” on his 2008 album “Earfood.” Stylistically, it is in a modern R&B style and includes a contrapuntal section of the melody.

The essence of jazz is its improvisatory nature, and the solos played by the members of the Jazz Combo are of their own creation.