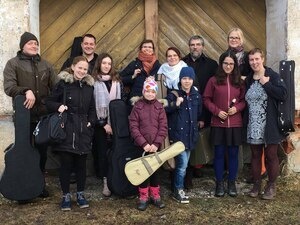 The Estonian music ensemble, Wana Wõromaa Wunkorkestri, will visit Western Maryland in June, performing in Cumberland on Monday, June 3, at 7: 30 p.m. at Our Lady of the Mountains, St. Mary Catholic Church, 300 E. Oldtown Road, and in Oakland on Tuesday, June 4, at 7 p.m. at the Oakland Community Center, 14 N. Eighth St. These events, supported by the Estonian Embassy and the cities of Cumberland, Frostburg and Oakland in partnership with Folklore and Folklife Programming at Frostburg State University and FSU’s International Studies Program, are free and open to the public.

The performances highlight the Sister-City Cultural Exchange Program – a special relationship between Estonia and Maryland, which began more than 25 years ago with the end of the Cold War as part of a NATO Partnership of Peace Program. Over the years, the partnership has grown to include civilian-to-civilian relationships focusing on the themes of education, twin cities/counties, cultural activities and economic development. As part of the exchange, Maryland residents have visited Estonia and several Estonian groups have visited Maryland. June’s programs highlight Cumberland’s sister city, Viljandi, and Oakland’s sister city, Valga, through the exploration and performance of Estonia’s rich folk music traditions.

Representing traditions of Vana-Võromaa, a region in the country’s southeast, this group is one of many community ensembles keeping alive Estonia’s rich folk music heritage. These ensembles are intergenerational, including children, adults and senior citizens. The region’s folk music heritage plays a particularly important role in Estonia’s political history, where the performance of its traditional choral music bolstered a cultural reawakening, contributing directly to what scholars refer to as “The Singing Revolution.” Choosing song over violence, Estonians gathered en masse to declare Estonian Independence from the Soviet Union in 1991.

For more information, contact Dr. Kara Rogers Thomas at FSU at krogersthomas@frostburg.edu or 301-687-3124.