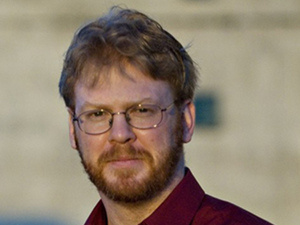 Frostburg State University’s Department of Music will open its fall season with a Faculty Artist Series concert by Dr. Jay DeWire, titled “Russian Masters,” on Sunday, Sept. 12, at 3 p.m. in the Pealer Recital Hall of FSU’s Woodward D. Pealer Performing Arts Center. The concert is free and open to the public. If you can't attend the recital, it will also be livestreamed; click the "Join Stream" button at right to join the livestream.

DeWire will perform “Kamarinskaya” by Mikhail Glinka/Mily Balakirev; “Étude-Tableaux in D Minor, Op. 33, No. 4” and “Prelude in B Minor, Op. 32, No. 10” by Sergei Rachmaninoff; “Preludio” from “Partita for Violin in E Major” by Johann Sebastian Bach/Rachmaninoff; “Sonata in A minor, Op. 30” by Nikolai Medtner; “Andante” and “Presto” from “Piano Sonata No. 2, Op. 19” (“Sonata Fantasy”) by Alexander Scriabin; and “Andante dolce,” “Andante sognando” and “Vivace” from “Sonata No. 8 in B-flat Major, Op. 84” by Sergei Prokofiev.

Kamarinskaya is a Russian traditional folk dance, which is mostly known today as Glinka's composition of the same name. Glinka’s “Kamarinskaya,” written in 1848, was the first orchestral work based entirely on a Russian folk song and the first to use the compositional principles of that genre to dictate the form of the music.

The “Études-Tableaux” (“Study Pictures”), Op. 33 is the first of two sets of piano études Rachmaninoff composed in 1911. They were intended to be “picture pieces,” essentially “musical evocations of external visual stimuli,” but Rachmaninoff did not disclose what inspired each one. “Moderato in D Minor – No. 4” is a simple march that grows into a thing of striking contrapuntal complexity.

Rachmaninoff’s “Preludes, Op. 32,” is a set of 13 preludes for solo piano, composed in 1910. “Prelude in B Minor, Op. 32, No. 10” was inspired by Arnold Böcklin’s painting “Die Heimkehr” (“The Homecoming” or “The Return”). Rachmaninoff stated that this was his personal favorite among his preludes.

The “Partita No. 3 in E Major for Solo Violin, BWV 1006.1” is the last work in Bach’s set of six sonatas and partitas. In 1933, Rachmaninoff transcribed for piano (and subsequently recorded) the “Preludio.”

Medtner was a Russian composer and pianist. After a period of comparative obscurity in the 25 years immediately after his death in 1951, he is now becoming recognized as one of the most significant Russian composers for the piano. The one-movement “Ninth Sonata in A Minor, Op. 30” was published without a title but was known as the “War Sonata” among Medtner’s friends; a footnote, “during the war 1914-1917,” appeared in the 1959 Collected Edition.

Russian Symbolist composer Scriabin’s “Piano Sonata No. 2 in G-sharp Minor, Op. 19” was published in 1898. The piece is in two movements, with a style combining Chopin-like Romanticism with an impressionistic touch. “Andante” begins with echoing effects, followed by two lyrically themed sections. After a short climax, the piece modulates to E major (also C-sharp minor), and lyrical sections are restated with a slightly more complicated accompaniment. “Presto,” in sharp contrast to the first movement, is very fast and intense. Alternating crescendos and decrescendos may give the listener the impression of waves.

“Piano Sonata No. 8 in B-flat Major, Op. 84” is the third of Prokofiev’s three war sonatas and was first performed in 1944. “Andante dolce” features two main themes, the first lyrical and mysterious in its wandering sense of melancholy and suppressed suffering, and the second conveying a feeling of desolation. For the middle panel, Prokofiev uses a charming, bright theme from his abandoned orchestral score, “Eugene Onegin.” The finale opens with a driving theme, but quickly turns heroic and majestic. The music ends ambivalently, with a rhythmic motif thrashing about before suddenly running short of energy.

The University is following CDC guidance based on current conditions in our area. Currently, FSU expects masks to be worn indoors when in the presence of others, regardless of vaccination status. Visitors to campus must visit www.frostburg.edu/checkin for symptom monitoring.