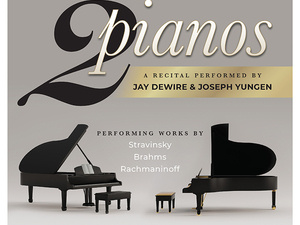 Frostburg State University’s Department of Music will present pianists Dr. Jay DeWire and Dr. Joseph Yungen in a Faculty Artist Series concert on Wednesday, Nov. 17, at 7:30 p.m. in the Pealer Recital Hall of FSU’s Woodward D. Pealer Performing Arts Center. The concert is free and open to the public. If you can't attend the recital, it will also be livestreamed; click the 'Join Stream' button on this page a few minutes before the recital is scheduled to begin, or anytime during the recital, to view the live performance..

Stravinsky’s “Sonata for Two Pianos” premiered in 1944. First conceived as a solo work, Stravinsky needed to write it for four hands to voice all four melodic lines clearly. It is considered one of his most important compositions for two solo pianos, together with “Concerto for Two Pianos.” The sonata is in three movements.

The four-movement piece, “Sonata for Two Pianos in F Minor, Op. 34b,” composed in 1864, is generally considered the fruition of Brahms’ entire early period. It is full of the romantic passion and vigor of the early works, yet demonstrates the complete mastery and control of form and effect that Brahms achieved later on in his output.

Rachmaninoff’s “Suite No. 2, Op. 17” is a composition for two pianos in four movements, written in Italy in 1901. Alongside the “Second Piano Concerto, Op.18,” it confirmed a return of creativity for the composer after four unproductive years caused by negative critical reception toward his “First Symphony.” In contrast to the “First Suite for Two Pianos,” the work is not based on literature, and its form tends to approach the traditional suite.

DeWire has performed across the United States as a soloist, collaborator and member of the West Shore Piano Trio. Highlights include two performances as a soloist with the Prince George’s Philharmonic. He has appeared in several competitions, received an honorable mention at the Washington, D.C., Beethoven Competition and was a finalist in the American Musicological Society (Mid-Atlantic Chapter) Writing Competition. DeWire has also received numerous prizes, including the Brander Wyatt Morrison Prize and a Dean of Faculty Fellowship at the University of Virginia. He teaches piano and history at FSU.