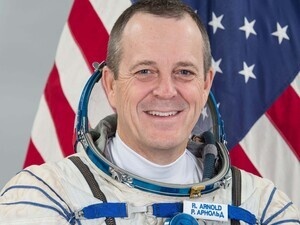 Astronaut Ricky Arnold to Speak About His Seven Months in Space

NASA astronaut Ricky Arnold, a 1985 graduate of Frostburg State University, will speak about the seven months he spent last year on the International Space Station on Wednesday, May 22, at 7 p.m. in the Pealer Recital Hall of the Woodward D. Pealer Performing Arts Center. The family-friendly event is free and open to the public.

As part of his talk, Arnold will show a video of highlights from his time on the space station. There will be an opportunity for the audience to ask questions.

Arnold became an astronaut after a career of more than a decade as a science and mathematics teacher at schools around the world. He earned a bachelor’s degree in accounting and teacher certification from FSU, and a master of science degree in marine, estuarine and environmental science from the University of Maryland.

Arnold has spent 209 days in space and conducted five spacewalks over two missions. He also completed a mission as an aquanaut in a joint NASA-NOAA mission on NEEMO 13, living and working in and around Aquarius, an undersea laboratory.

Arnold first visited the International Space Station as part of STS-119 via the Space Shuttle Discovery. Then last year, he spent 197 days as a flight engineer in ISS as part of Expeditions 55 and 56, which included numerous educational downlink events to schools.

It was one of these educational downlink events that was the center of NASA Day on campus on April 9, 2018, which happened to be the 120th anniversary of the founding of FSU. More than 1,300 middle school students from the region came to campus to view the downlink and participate in space-themed activities led by dozens of FSU College of Education students. (The downlink can be viewed at www.facebook.com/FrostburgStateUniversity/videos/10155250.)