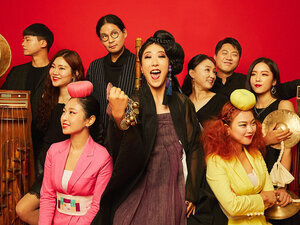 Ak Dan Gwang Chil celebrates Korea’s folk roots with delightful, unexpected style. As The New York Times observed, they play “not as earnest traditionalists, but as a giddy showband with all the trappings of K-pop.” Fronted by the charismatic figure of singer Hong Ok, and with traditional instruments like the gayageum and ajaeng (zithers), piri (reed flute), daegeum (bamboo flute), janggu drums, gongs and other percussion, they joyously extract and enhance the groove potential of ritual rhythms.

Formed in 2015 to commemorate the 70th anniversary of Korean liberation from Japanese occupation, Ak Dan Gwang Chil has since performed on festival stages in Russia, the United States, South America and Europe.

This engagement is funded through the Mid Atlantic Tours program of Mid Atlantic Arts Foundation with support from the National Endowment for the Arts and is supported by Korea Arts Management Service. CES is supported in part by the Maryland State Arts Council (msac.org), the Allegany Arts Council and the City of Frostburg.

Register
Top
This event content is powered by the Localist Community Event Platform.