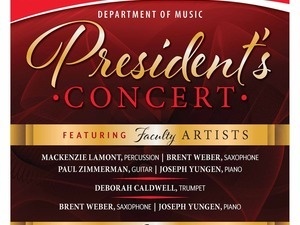 Faculty artists include Dr. Deborah Caldwell on the trumpet, Dr. Mackenzie LaMont on percussion, Dr. Karen Lau on the cello, baritone Gregory Stuart, Dr. Brent Weber on the saxophone and Dr. Joseph Yungen on the piano.

Music majors selected to perform include sopranos Ryann Cooper, Andrea Gormley and Hannah Polk, as well as Zhicen Liu on the piano, Caitlyn Rund on the saxophone and Paul Zimmerman on guitar.

“Gristle,” written in 2017, is unique among LaMont’s current works in that it is not inspired by the environment, politics or social issues. Instead, his goal was to capture a raw and gritty form of pure energy. The title “Gristle” represents that the piece is made up of connective materials that tie together the “meatier” parts.

“Quatre Variations sur ur theme de Domenico Scarlatti” is a trumpet solo composed in 1950 in the form of a theme, which Bitsch borrowed from Scarlatti’s “Sonata in D major, K. 21,” and variations.

“Behold, I Tell You a Mystery” and “The Trumpet Shall Sound” are from Part III of Handel’s “Messiah.” Part III concentrates on Saint Paul’s teaching of the resurrection of the dead and Christ’s glorification in heaven.

Composed in 1965, Moreno-Torroba’s three movement “Sonatina” for solo guitar follows the traditional fast-slow-fast arrangement of movements. The first of these movements, “Allegretto,” opens with a joyous melody in a vibrant rhythmic pattern. That pattern is repeated throughout the movement in the melody and accompaniment to sustain its drive.

“Chanson pour ma mie” (“Song for My Love”) and “La bohémienne” (“The Gypsy”) are from “Tableaux de Provence” (“Pictures of Provence”), a programmatic suite composed between 1948 and 1955. The movements describe the culture and scenery of Provence in southeast France.

“Orfeo ed Euridice” by Gluck is based on the ancient Greek myth of Orpheus. Orfeo laments Euridice’s loss in “Ahime! Dove trascorsi? ... Che faro senza Euridice?” Orfeo’s shock and sorrow are prominent as he asks himself and the gods what he is to do without his love.

“Scherzo No. 3 in C-sharp Minor, Op. 39,” which Chopin completed in 1839, was written in the abandoned monastery of Valldemossa on the Balearic island of Majorca, Spain. This is the most terse, ironic and tightly constructed of the four scherzos.

In 1882-83 Strauss wrote his “Horn Concerto No. 1 Op. 11, which has become the most frequently performed horn concerto from the 19th century. The composition is typical of Strauss’ music at this time – Romantic in style and showing the influence of Mendelssohn.

“Mira” is from “Carnival,” a musical, originally produced on Broadway in 1961, with music and lyrics by Merrill. The musical is based on the 1953 film “Lili,” which again was based on the novel “Love of Seven Dolls” by Paul Gallico. It is about a naïve French girl whose emotional relationship with a carnival puppeteer is conducted through the medium of puppets.