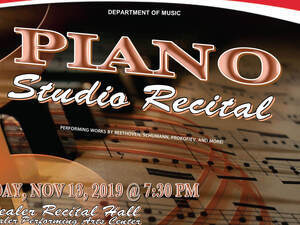 Frostburg State University’s Department of Music will present the Piano Studio, under the direction of Dr. Jay DeWire, in a recital on Wednesday, Nov. 13, at 7:30 p.m. in the Pealer Recital Hall of FSU’s Woodward D. Pealer Performing Arts Center. This event is free and open to the public.

The program will include “No. 1 in B Major, Tempo giusto” and “No. 2 in E Major” from “Waltzes, Op. 39” by Johannes Brahms, performed by Cayla Gavin and Morgan Danver; “I. Allegro ma non troppo” from “Symphony No. 6, Op. 68” by Ludwig van Beethoven, performed by Luke Liu, Andrew Hartnett, Robert Bittinger and DeWire; “I. Moderato” from “Tales of an Old Grandmother” by Sergei Prokofiev, performed by Bittinger; “I. Von fremden Ländern und Menschen” (“Of Foreign Lands and Peoples”) and “VI. Wichtige Begebenheit” (“An Important Event”) from “Kinderszenen” by Robert Schumann, performed by Hartnett; and “Scherzo No. 3, Op. 39” by Frédéric Chopin, performed by Liu.

“Waltzes, Op. 39” is a set of 16 short waltzes for piano that Brahms composed in 1865. They were dedicated to the music critic Eduard Hanslick.

“Symphony No. 6 in F Major, Op. 68,” also known as the “Pastoral Symphony” (“Pastorale”), was completed in 1808. It is one of Beethoven’s few works containing explicitly programmatic content. The symphony begins with “Allegro ma non troppo,” a placid and cheerful movement depicting the composer’s feelings as he arrives in the country.

“Tales of an Old Grandmother, Op. 31” is a set of four piano pieces. It was composed in 1918 during Prokofiev’s exile in the United States after the outbreak of the Russian Revolution. In this nostalgic piece, an old grandmother narrates tales to her young grandson who sits on her lap and listens attentively.

“Kinderszenen” (“Scenes From Childhood”) is a set of 13 pieces of music for piano written in 1838. Schumann told his wife Clara that they were inspired by her comment that he sometimes seemed “like a child.” He described the pieces as “more cheerful, gentler, more melodic” than his earlier works.

Chopin completed “Scherzo No. 3, Op. 39, in C-sharp Minor” in 1839, in the abandoned monastery of Valldemossa on the Balearic island of Majorca, Spain. This is the most terse, ironic and tightly constructed of the four scherzos.