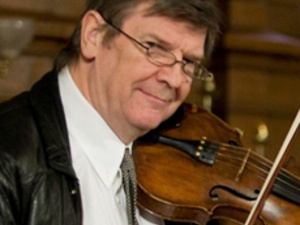 Frostburg State University’s Mountain City Traditional Arts will once again host legendary Irish fiddler Kevin Burke on Wednesday, May 1, at 7 p.m. at 25 E. Main St. in Frostburg. The live entertainment is free and open to the public with a suggested donation of $15.

Burke’s fiddle playing has been at the forefront of traditional Irish music for more than 30 years. He has been established as a first-class musician ever since his work in the early 1970s with such renowned performers as Arlo Guthrie, Christy Moore and the Bothy Band and with his far-reaching solo album, “If the Cap Fits.” During his long musical career, Burke, a National Heritage Award Fellow, has earned international acclaim in Europe and America as a solo performer, a teacher and as a member of some of folk musics foremost groups.

Although Burke has spent much of his life playing in groups, he has never lost his love for solo fiddle music – the “naked fiddle” as he puts it. This is evident in his new live solo release, “An Evening With Kevin Burke,” a collection of performances and stories before audiences in Ireland and the U.S. Whether solo or accompanied, Burke is an immensely engaging performer.