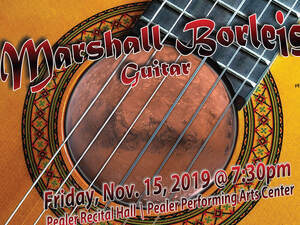 Frostburg State University student Marshall Borleis will present his junior guitar recital on Friday, Nov. 15, at 7:30 p.m. in the Pealer Recital Hall of FSU’s Woodward D. Pealer Performing Arts Center. He will be accompanied by Nate Richards, Paul Zimmerman and Shawn Zimmerman of the FSU Guitar Ensemble. This event is free and open to the public.

Borleis will perform “Romance for Tree” by Takashi Yoshimatsu; “Waltz for Zizi” by Yoko Kanno; “I. Sonatine,” “II. Scherzo” and “III. Tempo di Marzia” from “Opus 71, No. 3” by Mauro Giuliani; “I. Sarabande” from “Violin Partita No. 1” by Johann Sebastian Bach; “Gymnopédie No. 1” by Erik Satie; and “I. Ponteio (Agalopado),” “II. Cirranda (Roda, Roda)” and “III. Frevo (Isquenta Ô Pé)” from “Danças populares brasileiras” by Celso Machado.

Yoshimatsu is a contemporary Japanese composer of classical music. He is well-known for composing the 2003 remake of “Astro Boy.” He became interested in the jazz and progressive rock scenes, particularly in electronic music. “Romance for Tree” is from “Tender Toys for Guitar” (1983-4), a series of 18 pieces for classical guitar.

“Waltz for Zizi” is a song from “Cowboy Bebop,” composed by Kanno and performed by the Seatbelts.

Giuliani was a leading guitar virtuoso of the early 19th century, as well as a cellist, singer and composer. His 150 compositions for guitar with opus number constitute the nucleus of the 19th-century guitar repertory. He composed extremely challenging pieces for solo guitar, as well as works for orchestra and guitar-violin and guitar-flute duos.

The “Violin Partita No. 1” is a piece for solo violin Bach composed in 1720. It was written in his early days, when he hoped for a church position, though after being heard by Duke Johann Ernst, a court musician position was offered to him. Before exploring solo work, Bach had focused mainly on chamber music.

The “Gymnopédies,” published in Paris starting in 1888, are three piano compositions by French composer and pianist Satie. The piece’s unusual title comes from the French form of gymnopaedia, the ancient Greek word for an annual festival where young men danced naked – or unarmed. The melodies use deliberate, but mild, dissonances against the harmony, producing a piquant, melancholy effect.

“Danças populares brasileiras” is a set of short pieces for guitar quartet based on Brazilian dances by Machado, a Brazilian world music guitarist, percussionist and multi-instrumentalist.

Borleis studies under Dr. Isaac Greene at FSU. He has been on the Dean’s List and anticipates graduating in May 2020 with a bachelor’s degree in music industry. Borleis attended the Western School of Technology and Environmental Science in Catonsville, Md.