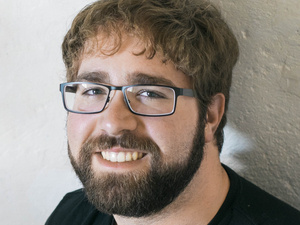 Frostburg State University’s Department of Music will present percussionist Dr. Mackenzie LaMont in a Faculty Artist Series concert on Sunday, Oct. 13, at 3 p.m. in the Pealer Recital Hall of FSU’s Woodward D. Pealer Performing Arts Center. Guest performers will be Dr. Eftihia Arkoudis and Dr. Joseph Yungen. The recital is free and open to the public.

“Kembang Suling” (1996) presents three musical snapshots of Asia. Movement 1 represents the music of Bali, including gamelan melodies and the techniques of the suling, a Balinese bamboo flute. Movement 2 recreates the sound of the Japanese shakuhachi flute. Movement 3, instead of using a specific flute sound, combines the rhythms and scales of south India.

“Trilogy” (1985) has become a standard vibraphone concert work. The composer allows the performer freedom in tempo, technical interpretation, pedaling and more, resulting in a slightly different piece from every performer.

Green recorded “Valse Brillante” (1927) in 1936, along with several other of his xylophone compositions, leaving behind a fantastic historical record of his work. The popularity of these pieces skyrocketed when Bob Becker of the percussion group Nexus adapted some of them in the late ’70s.

Everything in “Ethereal Boundaries” (2010-11) spirals out of the first three notes, quickly traveling between many key areas and colorful scales. The piece is improvisational in nature until a recap and coda at the end, reminding the listener of those first three notes.

The “Concerto for Marimba and Orchestra” (1986) was popularized in 1990 with the release of a CD and video by famed percussionist Evelyn Glennie and the London Symphony Orchestra. Rosauro incorporates many rhythmic and melodic elements of his native Brazil, but also his own take on jazz and modern music.

LaMont is an active composer, percussionist, music educator, music copyist and arranger, and owner/operator of a small music recording company. His recent compositions have focused on the environment as well as political and philosophical issues, with the sound inhabiting a space somewhere between minimalism and post-progressive rock. He is a full-time lecturer at FSU.