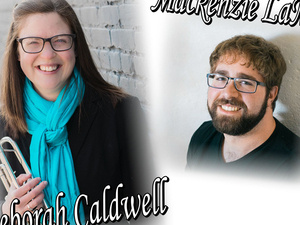 The program will include “Concert Scherzo” by Alexander Arutunian, “Quatre Variations sur un Theme de Domenico Scarlatti” by Marcel Bitsch, the first movement of “Concerto in E-flat Major for Trumpet” by Johann Nepomuk Hummel, “Vignettes for Trumpet and Percussion” by James M. Stephenson, three movements from “Eight Pieces for Four Timpani” by Elliott Carter and “Sonatina for Tenor Sax and Marimba,” “A View of the Badlands” and “Gristle” by LaMont.

“Quatre Variations sur un Theme de Domenico Scarlatti,” which Bitsch wrote in 1950, uses thematic and textural material from Domenico Scarlatti’s “Keyboard Sonata K. 21,” first published in 1739. Although the variations include only minor harmonic changes to the original, each one further obscures the theme’s melodic lines and eliminates all remaining Baroque characteristics.

“Concerto in E-flat Major for Trumpet, Movement 1” (1803) by Hummel is a quintessential trumpet works from the Classical era. One can hear Hummel’s fascination with chromaticism and scales coupled with the trumpet’s historical role of signaling with fanfares.

Stephenson composed “Vignettes for Trumpet and Percussion” in 2005 for Eric Berlin and the 2005 International Trumpet Guild Conference in Bangkok. The titles give away some of Stephenson’s musical heroes.

LaMont composed the “Sonatina for Horn and Marimba” in 2013. Written for a reading session by a horn and marimba duo, it was revised in 2015 for tenor sax and piano. For this recital, the two versions have been combined, becoming the “Sonatina for Tenor Sax and Marimba.”

“A View of the Badlands” was written in 2015 after a tour through South Dakota and Wyoming. It simply reflects reactions from viewing the changing landscape while taking a detour through the Badlands in South Dakota. It is part of an ongoing series of works representing LaMont’s love of the natural world, and his fear for its future.

“Gristle,” written in 2017, is unique among LaMont’s current works in that it is not inspired by the environment, politics or social issues. Instead, his goal was to capture a raw and gritty form of pure energy. The title “Gristle” serves several purposes: it represents that the piece is made up of connective materials that tie together the “meatier” parts and it completes a pact made in 2012 with composer Dan Harrison to use “gristle” as a piece’s title.

Caldwell has worked, performed and taught at the Territorial Music Institute in Texas, Interlochen Arts Camp, Blue Lake Fine Arts Camp and the Seoul Foreign School in Korea. She was a founding member of the Wabash City Brass Quintet in Kansas and enjoyed performing Ernest Bloch’s “Proclamation” with the KSU Orchestra as a winner of the Concerto Competition. Caldwell has performed in seven countries. She teaches trumpet, aural musicianship and history of musical theatre at FSU.

LaMont is an active composer, performer (percussion), music educator, music copyist and arranger and owner/operator of a small music recording company. His recent compositions have focused on the environment as well as political and philosophical issues, with the sound world inhabiting a space somewhere between minimalism and post-progressive rock. He is a full-time lecturer at FSU where he teaches percussion lessons and ensemble, composition lessons and courses, and various courses within the music industry track.