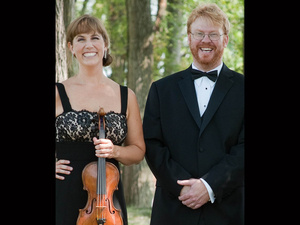 The Frostburg State University Department of Music will present pianist Dr. Jay DeWire and violinist Heather Haughn in a Faculty-Guest Artist Series concert, “German (?) Violin Sonatas,” on Sunday, March 8, at 3 p.m. in the Pealer Recital Hall of FSU’s Woodward D. Pealer Performing Arts Center. The recital is free and open to the public.

As Brahms was composing his “Violin Sonata No. 1 in G Major,” he was also engaged in a compositional debate over the destiny of the German musical tradition: would German music move into the future with Wagner’s concept of “total art work” and the program music of Strauss and Liszt, or could the tradition of chamber music that originated with Haydn, Mozart and Beethoven continue to be relevant? Meanwhile, Franck spent most of his adult life as the champion of a newly resurgent French nationalist tradition of instrumental music, exemplified by his “Violin Sonata.” There was just one problem – Franck’s style was essentially German, hence the question mark in the concert title.

Brahms composed the “Violin Sonata No. 1 in G Major, Op. 78, ‘Regensonate’” for violin and piano during 1878 and 1879. Each of the three movements of this sonata shares common thematic materials from the principal motif of Brahms’ two songs “Regenlied” (“Rain Song”) and “Nachklang” (“Echo”), and this is why this sonata is also called the “Rain Sonata” (“Regen-Sonate”).

Franck’s “Sonata in A Major for Violin and Piano” was written in 1886 as a wedding present for violinist Eugène Ysaÿe. It is one of his best-known compositions and is a mixture of his rich native harmonic language with the Classical traditions he valued highly, held together in a cyclic framework. The piece is notable for the difficulty of its piano part. Its technical problems include frequent extreme extended figures and virtuoso runs and leaps.