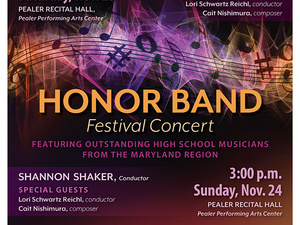 Frostburg State University’s Department of Music will host the Honor Band Festival Concert on Sunday, Nov. 24, at 3 p.m. in the Pealer Recital Hall of FSU’s Woodward D. Pealer Performing Arts Center. The Honor Band features outstanding high school musicians from the Maryland region, and the concert is the culmination of the High School Honor Band Festival that will take place on FSU’s campus over the course of the weekend.

Conducted by Shannon Shaker and featuring guest conductor Lori Schwartz Reichl and guest composer Cait Nishimura, the Honor Band will perform “Women of the Podium” by Virginia Allen, “Flight of the Thunderbird” by Richard Saucedo, “Into the Blue” by Nishimura and “This Cruel Moon” by John Mackey.

Written in a single tempo throughout, the energetic 2004 piece, “Flight of the Thunderbird,” generates excitement with limited technical demands. Saucedo uses active percussion figures augmented with optional additional mallet parts, along with powerful brass statements and layers of woodwind lines, to create a wonderful overall effect.

Nishimura’s “Into the Blue” (2018) is an uplifting, exciting, short piece for concert band that was inspired by the experience of flying above the clouds and into the clear, cloudless sky. Ostinatos represent a constant energy and forward motion, while memorable melodic fragments depict the feeling of soaring through the sky toward a new destination.

“This Cruel Moon,” which Mackey composed by in 2017, is the song of the beautiful and immortal nymph Kalypso, who finds Odysseus near death, washed up on the shore of the island where she lives all alone. She nurses him back to health, but one day Odysseus remembers his home and tells Kalypso he wants to leave her. That night she unravels her tapestry, which had become a record of their love, and weaves it into a sail for Odysseus. In the morning, she shows him a raft, equipped with the sail she has made, and calls up a steady wind to carry him home. Shattered, she watches him go; he does not look back.

Admission is $10 for adults; $5 for seniors, members of the military and FSU faculty and staff, and free for all students and children. Tickets will be available at the door. Cash and credit cards are accepted.