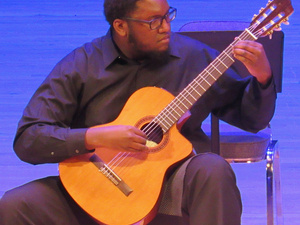 Frostburg State University student Grant Stryckning will present his senior classical and jazz guitar recital on Saturday, April 20, at 7:30 p.m. in the Pealer Recital Hall of FSU’s Woodward D. Pealer Performing Arts Center. He will be accompanied by guest artists Dr. Brent Weber on the saxophone, Mirto Dorcil and Tom Harrison on piano, and Dunel Petit-Frere on drums. The recital is free and open to the public.

Villa-Lobos composed “Chôros No. 1” in 1920. The title is taken from an improvisational genre of Brazilian instrumental popular music that originated in Rio de Janeiro in the 19th century.

Mertz, an Austro-Hungarian guitarist and composer, composed “Trois Morceaux, Op. 65” in 1857. His guitar music, unlike that of his contemporaries, followed the pianistic models of Liszt, Chopin, Mendelssohn, Schubert and Schumann.

“Gamma Band” is from “Star of Jupiter,” Rosenwinkel’s 10th album as a band leader, which was released in 2012. A review called the album “a contemporary classic.”

Tristano was an American jazz pianist, composer, arranger and teacher of jazz improvisation. His Manhattan address, 317 East 32nd Street, became the title of one of his compositions.

“I Loves You, Porgy" is a duet from the 1935 opera “Porgy and Bess” with music by George Gershwin and lyrics by Ira Gershwin.

“Windows” is one of the most popular jazz compositions by Corea. It first appeared on Stan Getz’s 1967 album “Sweet Rain,” then on Corea’s 1968 album, “Now He Sings, Now He Sobs,” and later on his 1973 album, “Inner Space.” It has become a jazz standard.

At FSU, Stryckning studies classical guitar under Patrick Sise and jazz guitar under Anthony Ambroso. He is a member of Sigma Tau Gamma Fraternity. Stryckning anticipates graduating in May with a major in music performance and a minor in jazz studies. A graduate of Elkton High School in Elkton, Md., he is the son of Blair and Grant Stryckning Sr. of Elkton.