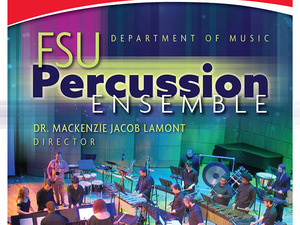 Frostburg State University’s Percussion Ensemble will present its first fall concert on Thursday, Oct. 17, at 7:30 p.m. in the Pealer Recital Hall of FSU's Woodward D. Pealer Performing Arts Center. This event is free and open to the public.

“Swords of Moda-Ling” was an outgrowth of a project Peters completed in 1957. Modal usage, pointillism, fabrics of sounds, syncopation, specific colors (instrument and mallet choices) and maximum keyboard use were the principle stylistic features of this piece. Peters also emphasized keyboard percussions.

“Streams” is a study in very quiet dynamics and strange timbres. It features a number of unusual techniques, even for a percussion ensemble, including the use of humming.

Willmarth’s “Uganda Marimba” is a short minimalistic work inspired by African music. It features four players on one marimba, forming two separate rhythmic pulses that interlock and fight against each other.

Ross is perhaps best known for his compositions featuring brass and woodwinds. Raised in Nebraska, he became a professional orchestral French horn player by the age of 17. His “Five Dream Sequences” is his only major piece for percussion.

Rouse’s “Ogoun Badagris” derives its inspiration from Haitian drumming patterns, particularly those of the Juba Dance. Ogoun Badagris is one of the most terrible and violent of all Voodoo loas (deities) who can be appeased only by human blood sacrifice. This work may thus be interpreted as a dance of appeasement. The word “reler,” which the performers must shriek at the conclusion of the work, is the Voodoo equivalent of the Judeo-Christian amen.

LaMont’s “First Study in Chaos” is just that – his first major work exploring controlled aleatory (music involving elements of random choice). The eight percussionists follow a strict timing system, but their order of entrance is chosen randomly for each performance. The addition of an eight-channel audio backing track helps to create the thick soundscape of this piece.

Beck’s concluding section of his “Overture for Percussion Ensemble” brings back the opening theme with such force that it works just as well as a finale.