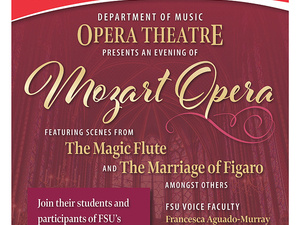 Frostburg State University’s Opera Theatre will present “An Evening of Mozart Opera” on Monday, Nov. 11, and Tuesday, Nov. 12, at 7:30 p.m. in the Pealer Recital Hall of FSU’s Woodward D. Pealer Performing Arts Center. This event is free and open to the public.

Voice professors and professional singers soprano Francesca Aguado-Murray, mezzo-soprano Dr. Lori Şen and baritone Gregory Scott Stuart will join their students and participants of FSU’s Opera Workshop in offering an entertaining evening of operatic fun, including opportunities for audience participation. They will be accompanied by pianist Dr. Joseph Yungen.

“An Evening of Mozart Opera” will feature scenes from Wolfgang Amadeus Mozart’s “The Magic Flute,” “The Marriage of Figaro” and “Don Giovanni.”

“The Magic Flute” (“Die Zauberflöte”), K. 620, is an opera in two acts by Mozart to a German libretto by Emanuel Schikaneder. The piece is in the form of a Singspiel, a popular form during the time that included singing and spoken dialogue. The opera premiered in 1791, just two months before the composer’s premature death.

In this opera, the Queen of the Night persuades Prince Tamino to rescue her daughter Pamina from captivity under the high priest Sarastro; instead, he learns the high ideals of Sarastro’s community and seeks to join it. Separately, then together, Tamino and Pamina undergo severe trials of initiation, which end in triumph, with the Queen and her cohorts vanquished.

“The Marriage of Figaro” (“Le nozze di Figaro”), K. 492, is an opera buffa (comic opera) in four acts Mozart composed in 1786, with an Italian libretto by Lorenzo Da Ponte. It premiered in 1786. The opera’s libretto is based on a stage comedy by Pierre Beaumarchais, “La folle journée, ou le Mariage de Figaro” (“The Mad Day, or the Marriage of Figaro”), which was first performed in 1784. It tells how the servants Figaro and Susanna succeed in getting married, foiling the efforts of their philandering employer Count Almaviva to seduce Susanna and teaching him a lesson in fidelity.

“Don Giovanni” (“Il dissoluto punito, ossia il Don Giovanni,” literally “The Rake Punished, Namely Don Giovanni”), K. 527, is an opera in two acts with music by Mozart and Italian libretto by Lorenzo Da Ponte. It is based on the legends of Don Juan, a fictional libertine and seducer, by Spanish writer Tirso de Molina and premiered in 1787. Although sometimes classified as comic, it blends comedy, melodrama and supernatural elements.