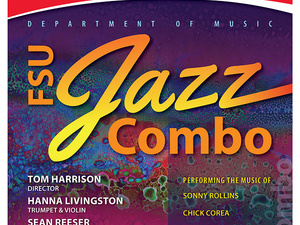 Frostburg State University’s Department of Music will present its Jazz Combo Fall Concert on Monday, Nov. 18, at 7:30 p.m. in the Pealer Recital Hall of FSU’s Woodward D. Pealer Performing Arts Center. This event is free and open to the public.

The program will feature director Tom Harrison on bass guitar, Hanna Livingston on trumpet and violin, Sean Reeser on saxophones, Marshall Borleis on guitar and Ryan Barber on drums.

Selections will include “Airegin” by Sonny Rollins, “Steps” by Chick Corea, “How High the Moon” by Morgan Lewis and Nancy Hamilton, “Mr. P.C.” by John Coltrane, “Satin Doll” by Duke Ellington, “Scrapple From the Apple” by Charlie Parker, “Once I Loved” by Antonio Carlos Jobim, “Totem Pole” by Lee Morgan and “My Foolish Heart” by Victor Young and Ned Washington.

“Airegin” is a jazz standard that American jazz saxophonist Rollins composed in 1954.

The harmonic “Steps” is from Corea’s 1968 album “Now He Sings, Now He Sobs.” Downbeat magazine awarded the LP zero stars; the reviewer refused to rate it because he didn’t know what to make of it.

“How High the Moon” is a jazz standard that was first featured in the 1940 Broadway revue “Two for the Show.”

“Mr. P.C.” is a 12-bar jazz piece in minor blues form that Coltrane composed in 1959. The song is named in tribute to the bass player Paul Chambers. It first appeared on the album “Giant Steps” where it was played with a fast swing feel.

A jazz standard written in 1953, “Satin Doll” has been recorded by Ella Fitzgerald, 101 Strings, Terry Callier and Nancy Wilson. Its unusual chord progression is well-known.

“Scrapple From the Apple” is a bebop composition from 1947. The song borrows its chord progression from “Honeysuckle Rose.” This was a common practice for Parker, since he based many of his successful tunes over already well-known chord changes.

The melancholy soliloquy, “Once I Loved” or “Love in Peace” (“Uma vez eu amei”), is a bossa nova jazz standard composed in 1960. After Sinatra’s 1967 recording, the song became one of Jobim’s best-known and most-covered compositions.

The heavily blues-based “Totem Pole” is from “The Sidewinder,” a 1964 album by jazz trumpeter Morgan.

“My Foolish Heart” is a popular song and jazz standard that Martha Mears performed in the 1949 film of the same name. It was nominated for the Academy Award for Best Original Song in that year.