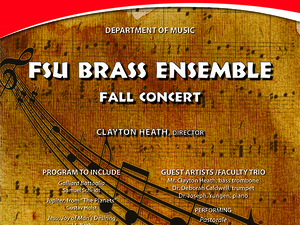 The Frostburg State University Department of Music will present a concert by the Brass Ensemble on Wednesday, Nov. 28, at 7:30 p.m. in the Pealer Recital Hall of FSU’s Woodward D. Pealer Performing Arts Center. The event is free and open to the public.

The recital will begin with solo works by two music majors. “Evelien” by Steven Verhelst will be performed by Arran Mills on the euphonium, and the first movement of “Sonata for Trumpet and Piano” by Kent Kennan will be performed by John Sommerfeld on the trumpet, accompanied by pianist Dr. Joseph Yungen. “Evelien” was written for the funeral of musician Glenn Van Looy’s cousin, Evelien Van Looy. “Sonata for Trumpet and Piano” was influenced by German composer Paul Hindemith’s neoclassical style.

Next is “Pastorale for Trumpet, Bass Trombone and Piano” by Eric Ewazen, which will be played by the faculty trio of Dr. Deborah Caldwell on the trumpet, Clayton Heath on the bass trombone and Yungen on piano. Pastorale is an arrangement of the middle movement of an earlier work, “Ballade, Pastorale and Dance for Flute, Horn in F and Piano,” composed in 1992. The piece has a gentle impressionistic feel.

The Brass Ensemble, directed by Clayton Heath, will feature Nicole Kehl and Brice Simpson on trumpets, Hanna Livingston and Corey St. John on horns, Deandre Cook on the trombone, Mills and Casey Swartz on euphoniums and Maakeh Boayue on the tuba. The group will be accompanied by Yungen.

The ensemble will first perform “Galliard Battaglia” by Samuel Scheidt. The galliard, a vigorous court dance for two people popular during the 16th and early 17th centuries, consisted of fairly aggressive moves. In “Galliard Battaglia,” played in a lively tempo, the two trumpeters apparently represent the two sides of the battling parties as they echo and attempt to outdo each other.

“Die Bankelsangerlieder” is a 17th-century Baroque sonata that has recently been attributed to Daniel Speer. Translated from the German, “The Song of the Bench Singers” refers to performers who often played in taverns while standing on benches.

“Jesu, Joy of Man’s Desiring” is the most common English title of music derived from a chorale setting of the cantata, “Herz und Mund und Tat und Leben, BWV 147” (“Heart and Mouth and Deed and Life”), composed by Johann Sebastian Bach in 1723. One of Bach’s best-loved works, this piece is a favorite at weddings when the bridal party enters. This arrangement is by David Hickman.

“In modo religioso, Op. 38” was written for brass quartet in 1886 by Alexander Glazunov, a leading Russian composer and Romantic Classicist who has been compared to Brahms.

The ensemble will end with a piece from “The Planets,” a seven-movement orchestral suite by the English composer Gustav Holst. The concept of the work is astrological rather than astronomical: each movement is intended to convey ideas and emotions associated with the influence of the planets on the psyche. The “Jupiter” movement is well-known as the British hymn, “I Vow to Thee, My County.” This arrangement is by Rolf Smedvig.