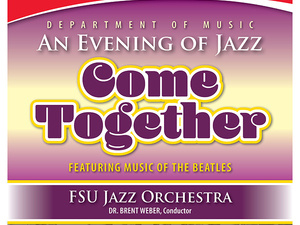 FSU’s Department of Music to Present Evening of Jazz

Frostburg State University’s Department of Music will present its Evening of Jazz with the FSU Jazz Orchestra, conducted by Dr. Brent Weber, on Friday, Nov. 22, at 7:30 p.m. in the Pealer Recital Hall of FSU’s Woodward D. Pealer Performing Arts Center. The program, titled “Come Together,” will feature several Beatles’ songs.

“Come Together,” the opening track on The Beatles’ 1969 album “Abbey Road,” started as John Lennon’s attempt to write a song for Timothy Leary’s campaign for governor of California against Ronald Reagan. Released as a single, the song reached the top of the charts in the U.S.

“Cute” is one of the great tracks from the Count Basie band of the 1950s, and one of a series written and arranged for the band by Hefti.

“Eleanor Rigby” released on The Beatles’ 1966 album “Revolver” and as a single with “Yellow Submarine,” continued the transformation of the group’s music from mainly rock and roll and pop to more experimental, studio-based work.

“Blue in Green” is one of two ballads on Miles Davis’ 1959 album, “Kind of Blue.” Its melody is very modal, incorporating the Dorian, Mixolydian and Lydian modes.

Hot Latin sounds emanate from “Samba del Gringo” from Goodwin’s Grammy-nominated CD, “Big Phat Band – Swingin’ for the Fences.” Flute and trumpet are featured at the beginning of the playful melody, but the entire ensemble gets a chance to “cut loose” on this powerful piece.

“Blackbird” is from The Beatles’ 1968 double album, “The Beatles” (“The White Album”). McCartney has said that the lyrics were inspired by hearing the call of a blackbird in Rishikesh, India, as well as the unfortunate state of race relations in the U.S. in the 1960s.

“Human Nature” is a 1982 song performed by Jackson, and the fifth single from his landmark sixth solo album, “Thriller.” It was originally written by keyboardist Steve Porcaro, based on a conversation he had had with his young daughter after a hard day at school.

"Chu Cho" is a wonderful Latin number D’Rivera wrote for Mario Bauza and his Afro-Cuban Orchestra that “simply oozes style.”

Admission is $10 for adults; $5 for seniors, members of the military, and FSU faculty and staff; $3 for students; and free for children 12 and younger. Tickets are available at the door. Cash and credit cards are accepted.