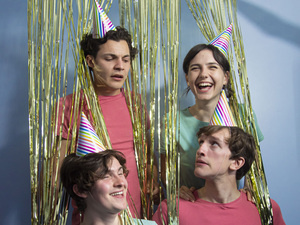 Department of English and Foreign Languages: CAST Presents “The Comedy of Errors”

CAST Presents “The Comedy of Errors” at Frostburg State University

This event is sponsored by FSU’s Department of English and Foreign Languages.

This Shakespearean comedy features two sets of identical twins with identical names who were separated as infants. Following years of traveling the world in search of their missing halves, Antipholus of Syracuse and his servant Dromio arrive in Ephesus, which happens to be the home of their long-lost siblings. Standing in the way of their reunion is a chaotic series of mistaken identities, confusion and a fair amount of cake.

Every September the team of Cambridge University students travels the U.S. to perform Shakespeare’s plays. CAST hosts education workshops on Shakespeare in addition to its performances.

Tickets are $6 for students and $12 for general admission. Tickets will be available at the door. For more information about the tour and the company this year, visit www.castcambridge.com.

Tickets are $6 for students and $12 for general admission.