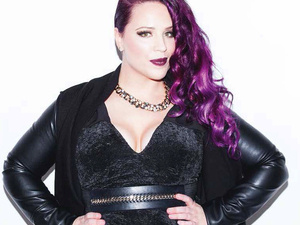 THIS PROGRAM IS CANCELLED. STACEY KAY HAS ENCOUNTERED UNFORESEEN TRAVEL DIFFICULTIES. A DECISION REGARDING RESCHEDULING WILL BE ANNOUNCED LATER.

Canadian singer Kay effortlessly blends rhythmic pop with earthy soul. Her unique and powerful voice paired with her machine-gun rapping style has garnered her online videos millions of views. In the words of pianist-composer-publisher Bill King, Kay has “… all the personality of 10 Bette Midlers, a commanding stage presence, big humor, diesel-truck ‘pedal to the metal’ ambition and a tremendous set of pipes.”

Kay was a contestant on Season 10 of “America’s Got Talent,” advancing to the final rounds and receiving rave reviews. She had a video go viral with over 40 million views by spontaneously performing one of Busta Rhymes’ fastest raps, and her covers of several hit songs have garnered the respect and recognition from the original artists, including Meghan Trainor, Iggy Azalea, Jennifer Hudson, Chris Brown and Mystikal.

Kay has captivated audiences across Canada, the U.S., Asia and Europe. She performed with Stevie Wonder’s band at a David Foster concert and last year performed for Neil Young and Bruce Cockburn, singing alongside k.d. lang at the Canadian Songwriters Hall of Fame Induction Ceremony at Massey Hall.

Kay was also a member of Eh440, an award-winning, Toronto-based a cappella group, and starred in the Broadway National Tour of “Godspell.” She is performing in the 2018-19 theatre season for Mirvish and Drayton in Canada.

Last year, Kay released her first full-length album, titled “11 O’clock Number.” Before the album was released, one of her songs, “Weight on My Shoulders,” won the Canadian Songwriters Award for Best Adult Contemporary/Pop Song of 2018, and her song “New Type” was featured on multiple popular playlists on Spotify.