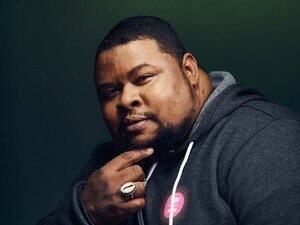 Frostburg State University’s Center for Literary Arts presents a reading by Michael W. Twitty from his award-winning book, “The Cooking Gene: A Journey Through African American Culinary History in the Old South,” on Thursday, Oct. 10, at 7 p.m. in Lyric Theatre at 20 E. Main St. in Frostburg.

“The Cooking Gene” is a food memoir that explores the influence that the enslavement of Africans by European settlers had on foodways and history of the Old South. The book includes personal narratives and recipes with African, Native American and European roots. His book won the 2019 James Beard Foundation Book Award and was a finalist for The Kirkus Prize in nonfiction, the Art of Eating Prize and a Barnes and Noble New Discoveries award.

Twitty is an African American and Jewish writer, independent scholar, culinary historian and historical interpreter. His goal is to prepare, preserve and promote African American foodways and its parent traditions in Africa and African Diaspora in its food legacy and culture of the American South. Twitty integrates his Jewish faith into African-American cooking and emphasizes the African flair added to European and Native American ingredients. He runs a blog, Afroculinaria, which covers African and African-American foodways. Twitty is also a Judaic studies teacher in Washington D.C.

In “The Cooking Gene,” Twitty describes the methods that African Americans used to cook on plantations, his travels to the South on what he called the “Southern Discomfort Tour” to learn about his family’s history and to authentically reproduce meal preparation experiences that former enslaved Africans may have had. This exploration of the culinary history seeks to raise awareness of the diversity of ingredients that African Americans traditionally ate in the South. In his book, Twitty also compares Jewish and Black foodways, and discusses followers of Judaism in the South. He explains how Jewish and Black culinary traditions and items have mingled with each other in the South and in northern cities and talks about his conversation to Judaism while expressing his fondness for Jewish cuisine.

This event is sponsored by Wholesome Harvest Co-op, FSU’s Department of English and Foreign Languages and Literature, and the dean of the College of Liberal Arts and Sciences.

To learn more about Twitty and his work, visit his blog at afroculinaria.com.

For more information, contact Jennifer Browne, director of the Frostburg Center for Literary Arts at 301-687-4340 or jabrowne@frostburg.edu.

Jennifer Browne, director of the Frostburg Center for Literary Arts